3 Personal Branding Lessons Anyone Can Learn From Hamilton 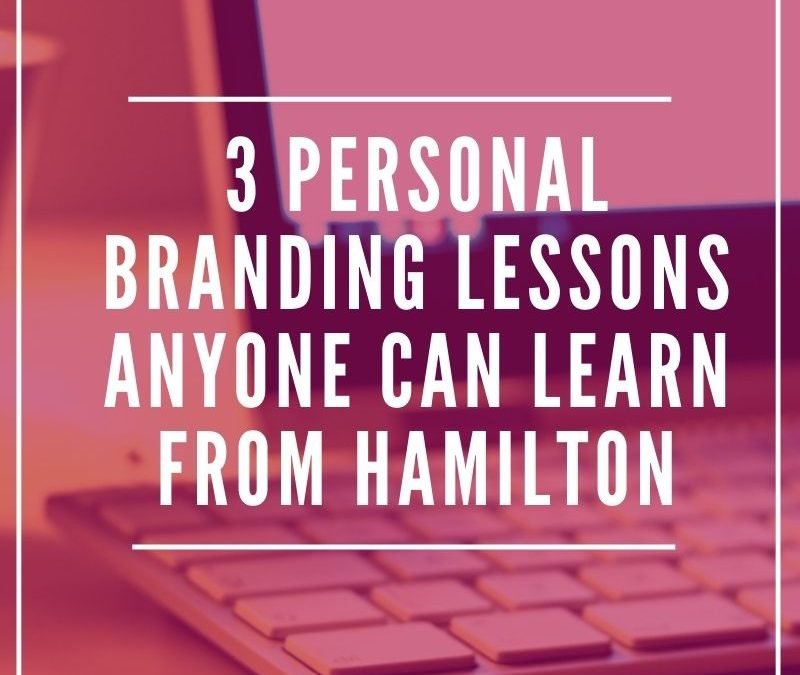 “How does a bastard, orphan, son of a whore and a Scotsman, dropped in the middle of a forgotten spot in the Caribbean by Providence impoverished in squalor, grow up to be a hero and a scholar?”

The opening lines of the song “Alexander Hamilton” echoed in the theater as everyone’s eyes were glued to the stage.

“I can’t believe we’re here,” I whispered to my husband for probably the fifth time.

I was so school-girl giddy, it didn’t even matter that the sangria I was sipping from a Hamilton tumbler, Lays potato chips, and Twix cost over $50.

Always the king of surprises, Shawn got tickets for us to see the ground-breaking play, Hamilton. I’ve been wanting to see it for years, so he seized the opportunity to make it happen while we were child-free for the afternoon. Four weeks later, Broadway went dark as Coronavirus took the stage and turned the world upside down.

With Hamilton now entering homes via Disney+, I’m thrilled to find any reason to swoon over the brilliance of creator and star Lin-Manuel Miranda. His storytelling and the diverse cast brought history to life with the perfect marriage of hip hop, R&B, and classic Broadway songs.

While the backdrop of the story is the Revolutionary War through the lens of Alexander Hamilton, there’s also a branding theme. This immigrant “ten dollar, founding father without a father” was determined to carve his name in history. He wanted to build his reputation—which is in fact personal branding.

Even if you didn’t check out the play, here are three lessons you can apply to building your own brand.

Lesson #1: Your Mindset is Everything

One thing’s for sure: Hamilton didn’t rise up based on his name. Unlike frenemy, Aaron Burr, he didn’t have an established name and wasn’t a trust fund baby. In fact, Hamilton was a penniless orphan. But he navigated back-to-back tragedies with the kind of hustle and resilience that’s formed like a callus that only comes after enduring more than the average person.

So how did Hamilton become successful? He worked harder and smarter than everyone —reading any book he could get his hands on and writing like he’s running out time. Hamilton’s brain was his currency. So, in a way, he was rich. His relentless mindset attracted as many admirers as enemies. But it also created opportunities that made him indispensable and the right-hand man of General George Washington.

The thing about building your brand is that it’s essential to have the right mindset for success. Your mindset can give you wings or weigh you down. Like Hamilton, you’ll face situations where you’ll have to overcome obstacles and take control of your name. But if you adjust your approach, the same challenges that could take one person down can build you up. By shaping your own story, the only limit to how far you’ll go is up to you.

Lesson #2: Use Your Voice to Stand for Something

This was the advice from Burr to Hamilton. Burr’s approach to building his reputation was watching which way the wind blows and waiting to take advantage of the opportunities that came his way. On the other hand, there’s no mistaking what was on Hamilton’s mind (he either wrote about it or talked about it—loudly!).

For example, in a scene where Hamilton debates with Samuel Seabury (a loyalist who wrote “Free Thoughts on the Proceedings of the Continental Congress”), Burr intervenes saying, “Alexander, please!”

Hamilton’s response? “Burr, I’d rather be divisive than indecisive, drop the niceties.”

Burr clearly had a more polished personality than Hamilton. But his refusal to take a stance on anything eventually hurt his reputation. Whether you liked Hamilton or not, at least you knew where he stood on pressing issues.

Being outspoken when you’re building your brand is not without risk, though. It’s easy to shut up and sell because it’s comfortable. It’s neutral. But sharing your point of view is the only way to cut through the nonsense and genuinely connect with others.

It’s important to use your voice to say the hard things as much as you say what’s easy and widely accepted.

Lesson 3: You Don’t Have to be The Loudest in The Room

So, we’ve talked a lot about Hamilton, right? Clearly, since the play is based on his life and the men that fought alongside him. But there’s another Hamilton who built a powerful brand: Eliza Hamilton —Alexander’s wife.

As one-third of the Schuyler sisters (the daughters of General Phillip Schuyler), Eliza wasn’t a shrinking violet, even if she was hopelessly in love with Hamilton.

Eliza, too, built her reputation as she overcame personal obstacles, including losing her oldest son Phillip in a duel and finding out about Hamilton’s affair with the rest of the world via the Reynolds Pamphlet.

Embarrassed and angered by Hamilton’s selfish actions to clear his own name, she took control of her own name by burning the love letters they exchanged.

In the haunting song “Burn,” Eliza declared “I’m erasing myself from the narrative…the world has no right to my heart.”

When you think about it, the world knows about Hamilton’s brand story because of Eliza. Sure, she wasn’t as audacious or on the frontlines. But Eliza saved Hamilton’s legacy and created one of her own.

As a widow, she interviewed many of the soldiers who fought with Hamilton, established the first private orphanage in New York City, and started a school. She had a powerful impact and was the heroine of the story.

So, yes, personal branding is about commanding attention and being “seen.” But ultimately you can make an impact in a way that feels right for you. You can still be a powerful force even if you’re not the loudest in voice in the room. The true measure of a brand is not about how far your voice will go but the impact it makes on the world.

There’s so much to unpack in the play Hamilton and the actual history it’s based on. But these personal branding gems can make you look at it another way as you build and tell your own story.