Can a Mistake Ruin Your Brand? Lessons From Steve Harvey’s Universal Oops 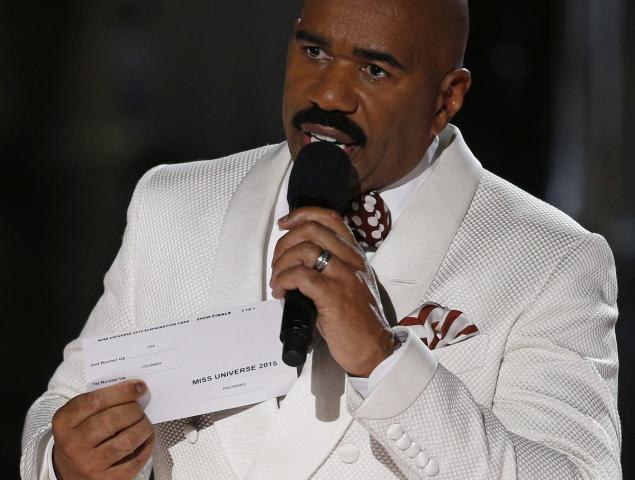 Making a mistake on live national television has to be worse than having a dream where you’re standing naked in front of a classroom (how real can anxiety dreams feel sometimes!?).

Over the weekend, television personality and comedian—among a whole bunch of other stuff — Steve Harvey made a mistake heard around the universe: He announced the wrong winner during the Miss Universe pageant.

Of course, as a famous brand, he is now trending everywhere on social media for this blunder (and I’m pretty sure Saturday Night Live is working on a skit about this as I type).  I guess I’m more surprised that such an archaic pageant still exists rather than the fact that a seasoned host made a mistake.

Who made a rule that strong brands can’t make a mistake?

Being good at what you do doesn’t mean you’re exempt from messing up. And when did it become okay to make people feel like crap when they do? (Trust me, they are already doing a good job being hard on themselves.)

The harsh reality of this situation is that the higher you climb, the harder you fall.

People can be real schmucks when it comes to crucifying strong brands. Whether or not you’re a fan of Harvey, there’s no denying he has an established career as a television host.  As a matter of fact, he breathed new life into the long-running show Family Feud, which is now number 1 in syndication for the first time.

There’s something about seeing someone on top mess up that makes the “little engines that don’t” feel better about themselves. You see it at work all the time when a manager wants to tell you about an insignificant typo in the presentation you created for her. Or, the colleague who didn’t contribute squat to a project, but joins in on bashing you for missing something that he caught.

The excess scrutiny can make you hesitant to put yourself out there, because, face it, who wants their mistakes to be someone else’s entertainment?  (I wrote about this very topic in a recent article.)

When you’re feeling vulnerable and make a mistake, it can feel like there’s no turning back from it. But it’s not the end of the universe, if you keep these things in mind.

1. Suck it up. The reality is this: You’re only human. And without me bursting out singing one of my favorite 80s songs Human by The Human League, you’ll just have to take my word for it. Mistakes are bound to happen, and often it’s when you’re growing and navigating uncharted waters.

This was the first time that Harvey hosted a beauty pageant, (and most likely the last), which means there were learning curves he didn’t expect. It was a different kind of show, and not a taped recording where there are do-overs as he is probably used to.

If you have a consistent track record for being good, a mistake here or there is not going to tarnish your personal brand—baring you did not do something completely horrible. Sure, it can be unnerving, but making mistakes usually are signs that you’re stepping outside of your comfort zone and trying something new, which is always a good thing.

2. Own it. After minutes of awkward confusion, Harvey had the tough job of fixing his mistake. He graciously took full responsibility for reading the wrong name, although it may or may not have been completely his fault.  Showing humility during a mistake is the first step in making it better. You never want to fan the fire by blaming others. In fact, the worst thing you can do when you’re wrong is to get defensive. It not only makes it harder for anyone to sympathize with you, but now you really just look like a jerk. The quicker you take accountability for a mistake, the easier it will be to move on.

3. Learn from it. Ah, the proverbial lessons learned from our mistakes. Every moment is a teaching opportunity. When I trained systems, I loved when my students made mistakes (here me out before thinking I’m a cruel person). I would always use these examples as opportunities to remind them what to look for so they can avoid doing the same thing again. I bet you if Harvey ever hosts another live television event, he would somersault off the stage backwards before making a similar mistake.

The good thing is that as you carry these lessons with you, life goes on; people have short memories when it comes to these things anyway.

There will always be the next “trending” moment for people to focus on. Make sure you don’t get hung up on your mistake for too long. A strong brand can always recover from a mistake, so don’t be afraid to make them.