Is It Time to Push Through or Move On? 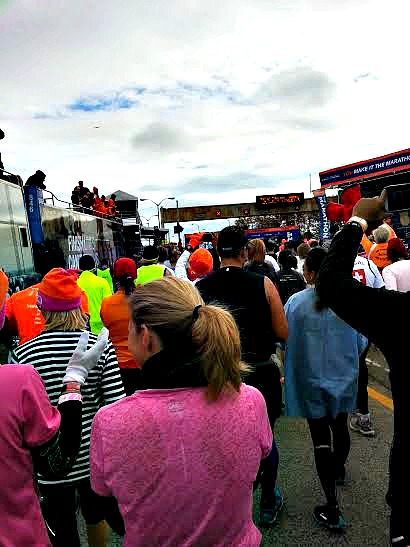 It took five years, seven hours, and six minutes to complete my first (and only) marathon on November 3, 2013. Sure, the five years wasn’t the actual race, but the time spent making it possible counts just the same.

That unforgettable day almost didn’t happen, though. The ING New York City Marathon was canceled for the first time in history the year I was supposed to run. There was a devastating storm in New York City weeks before the race, and the decision whether or not to hold it was ongoing and controversial.

I found out about the cancellation while standing in line with my running team and thousands of other runners at the Marathon Expo. (We were waiting to pick up our racing bibs and t-shirts two days before the race.)

To say I was disappointed is an understatement; I was crushed.

Logically, I respected the decision and understood why it was made. Emotionally, it was a bitter pill to swallow.

It goes without saying that training to run 26.2 miles takes a lot of discipline—especially since I never really considered myself a “runner.” I exchanged sleeping in on the weekends for early long runs before the sun got too hot. I also reluctantly declined a lot of social invitations in order to train—wings and cranberry and vodka weren’t the best fuel for a run. Clearly first-world problems, I know, but still true nonetheless.

The race I was so excited to run was becoming a burden.

It took months to decide to pay the entry fee (again) and start training (again) the following year. Then, seven months before the marathon, there was a bombing at the Boston Marathon. Knowing first-hand what that day meant for the runners and all the friends, family, and neighbors cheering everyone on with excitement, my heart sunk.

I watched the footage on the news all day in utter disbelief and sadness. With the New York City Marathon coming up next, security was obviously a big concern. I questioned again whether or not I wanted to go through with the race, but now for additional reasons.

The “fear monsters” crept into my head trying to convince me that this is more than enough reason to not go through with the race.

“You could gracefully bow out now and everyone would understand,” I told myself.

I ultimately decided to run the race because I knew I didn’t want to sit on the couch and watch it on television that day thinking, “That could have been me.” I was also fortunate to have trained and ran with my super supportive fiancé, now husband, who reminded me how much I wanted this crazy goal.

I still remember the crisp fall air on that Sunday morning. I remember the brief seconds of being alone with my thoughts as I stood at the start line on top of the Verrazano Bridge surrounded by over 50,000 runners, and the sound of Frank Sinatra’s “New York, New York” blasting through the speakers.

Yes, the success of getting to that day felt amazing—minus the aches and pain that tagged along as a friendly reminder. But the self-doubt, fear, and setbacks were what really defined that moment. People tend to leave the gritty part out of their stories and make everything seem like it was a breeze. But talking about the other side is just as important.

So I will tell you that for every goal I’ve accomplished, there are many that I had to let go. There are many times I failed, had breakdowns, and moved on to start all over again.

How many times have you wanted something so bad, but everything that can go wrong does? Or you’re in the middle of the process just to realize you just don’t want it anymore?

You see, the obstacles don’t only happen at the start of your goal, but also throughout the process.

You may have a goal to get an advanced degree, finish a program, get promoted, get a new job, lose weight, write a book, or start your own business. And yet you feel like a hamster on the wheel—constantly on the move, but going absolutely nowhere.

No matter what that “thing” is for you, it can feel like a marathon. You may feel likeeveryone is watching and judging you for not finishing it through or being “too slow” to make progress.

All the positive motivational “winners never quit” quotes in the world can’t give you the motivation you just don’t have. Neither does having everything laid out for you confirm you’re on the right path.

Your growth comes from conflict; those fork in the road moments when you have to make a choice.

So how do you decide?

You should push through if you…
—  know what you want, but feel stuck.
— would regret your decision to not move forward.
— are listening to the “fear monsters” in your head.

You should let go if you…
— hate the direction you’re moving in.
— know what you’re doing doesn’t align with what you need.
— are going through the motions because you don’t want to look like a quitter or flake.

Here’s the thing: There is just as much strength in letting go as it is in pushing forward.

But only you can make that decision.

And that, my friend, is when you cross the finish line.