Shut up and sell? 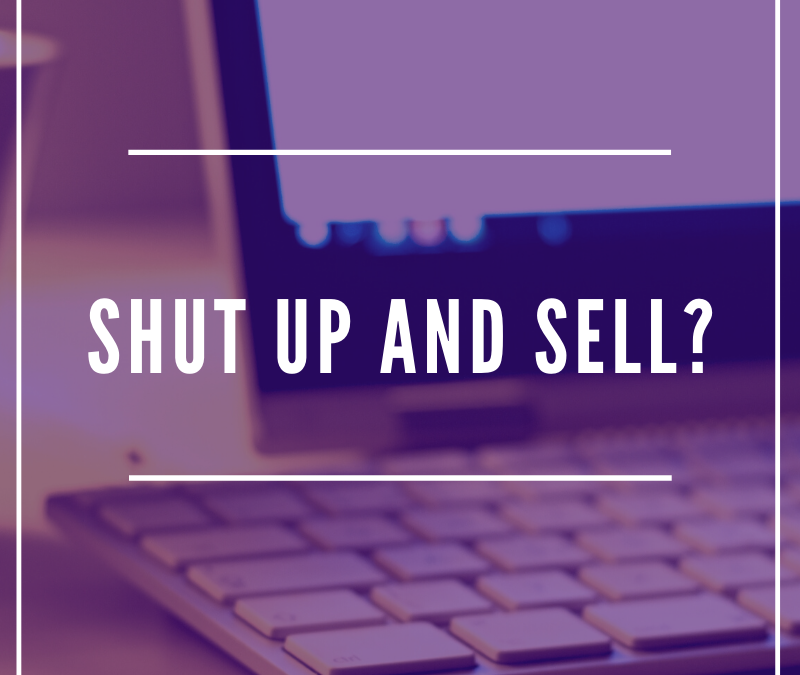 Silence is sometimes the loudest sound during times of crisis.

Three months ago, a virus shoved its way into our lives and knocked the world off its axis. The name? Coronavirus or COVID-19 for short (as if an acronym makes it less scary—like calling Halloween’s Mike Meyers “Mikey”).

Businesses, big and small, quickly swooped in. There were plenty of opinions, free everything, and lots of talk about how to navigate these “uncertain times.” There was (and continue to be) a business and personal impact.  And the message was to speak up and continue to sell.

There was no room for silence. But I didn’t have many words to offer.

While everyone was putting on their capes to tackle this crisis head-on, my initial reaction as an introvert was to retreat. I wanted to hide in a cave and eat vanilla, vanilla cupcakes with rainbow sprinkles (not confirming or denying that I did).

The right words escaped me even though words are my thing. (I’m a writer for goodness sake!?) But I wanted to make sure that my voice added value and not noise.  And I was consumed with trying to find basic household items since Charmin toilet paper became the new golden tiger.

Now we’ve encountered another virus. This one isn’t new though. And there’s no dressed up nicknames. Just the unclothed truth that people are left to confront: you’re either racist or anti-racist.

The topic of racism and unconscious bias has grabbed the business world by the bells—ringing loudly across social media.

But there wasn’t the same rush to put on the capes to tackle this crisis. Putting this cape on is like volunteering to walk barefoot over hot coals.

“What if I say the wrong thing?”

“What if I piss off some of my audience?”

“What if I’ve been a part of the problem?”

A close examination of your own views can make it harder to find your voice. It can make you feel uncomfortable. Defensive. Guilty. But you can’t social distance yourself from this virus.

Saying “black lives matter” may feel political. But is it a political issue or a human one? Talking about George Floyd, Breonna Taylor, Ahmaud Arbery, Rayshard Brooks, and so many black lives cut short can feel like unchartered territory.  But are these tragic murders and subsequent protests for equality new?

Business as usual is the culprit because racism and unconscious bias existed long before these last few weeks. And just like COVID-19, there’s a business and personal impact. This impact cannot be ignored or silenced.

As a black woman, talking about racism is like being a soldier and a general. I don’t have the privilege to say, “I could never imagine,” because I can and very vividly. So, again, my initial reaction is to worry and retreat. To analyze. To think about whether I’m adding insight instead of noise. It’s a messy internal tug-of-war. But I know that I can’t just shut up and sell because my voice matters—and so does yours.

Here’s the thing: If building relationships based on trust is important to your brand, there’s no room for silence.

That’s why major companies immediately take a stance during times of crisis. Now whether people agree or not is another story. But there’s no guessing about their point of view.

So where do we go from here?

There’s no easy answer. And these issues won’t be solved in 30 minutes like in a TV sitcom. Working towards real change is a marathon and not a sprint. But we must continue to find the words that reflect our hearts and get comfortable with being uncomfortable.

Even if you’re not the first speak up. Even if your words don’t come out perfectly the first time. Your voice and stories are as important as the services you sell.

People are watching. And they’re listening. So the question you have to answer is which risk are you willing to take. Speaking up or saying nothing at all?